After two incredible visits to Venice, I can confirm it is as charming as they say it is. There’s something about being surrounded by water and gondolas that hits a more pleasant chord than bustling streets full of Vespas.

Venice was formerly a powerful sort of empire, built on trade and petrified wood. Venice began as a lagoon inhabited by Italians escaping the barbarians. As the city grew, the people needed stronger, heavier buildings. How often do you see cathedrals sitting atop the swamps in Florida? Exactly. So they sunk petrified wood into the lagoon to serve as a stable foundation.

Fast forward. Venice yearned to be its own independent being. At the time the way to make a name for yourself was to be divinely blessed by a supreme relic of a saint, preferably said saint’s body. And so the legend goes that the Venetians stole Saint Mark’s body from Egypt and hid it under a heaping pile of pork meat, as Egypt was a Muslim nation and the Islamic religion forbids contact with pork.

Walking down the streets, you can easily see where the lagoon is reclaiming its territory. What used to be the ground floor is now a flooded basement. Also, as the water level rises the city compensates by building floor upon floor to rise above it.

There are no vehicles here. Transportation is strictly by boat or foot.

My first visit was accompanied by my father and stepmother during February, which just so happens to be the month that the Carnivale is celebrated. Carnivale is the celebration that takes place before Lent involving parades, elaborate costumes, and masks. 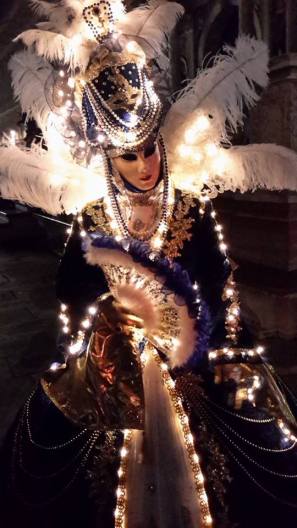 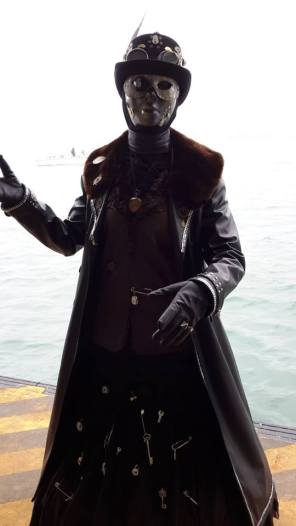 Venice is a well known Carnivale hub and holds the annual festivities in Piazza San Marco, or Saint Mark’s Square.

Found entirely by chance, this could be the most unique experience I had in Venice. With some time to kill I walked into a San Simeone Piccolo as churches often have the most stunning interior. I found just as I expected and more. For a euro to aid in upkeep of the church, I was given a lit candle and “a destra poi a sinstra” (a right then a left) to go down into the crypt.

As it is disrespectful to take photos in many parts of churches here, I documented none of what lies beneath the floor. With no light but this candle, I explored the crypts of people I wish I could name, however the church attendant spoke little English and nothing was labeled like many of your typical monuments. Though clearly very old, there is little to no information concerning the crypt.

Burano is a quaint island off the mainland of Venice known for vividly colored homes and lace. Many of the the windows also held birdcages with a singing parakeet or something similar perched inside.

Legend says that a ship ran into a nest of mermaids. Mermaids were known for their ability to lure men into the deadly sea and thus, their demise. All but one sailor met their fate. This man had a fiance waiting for his return and his loyalty was so steadfast he was unmoved by the call of the mermaids. Impressed, they created a lace wedding veil out of the sea foam to take home to his fiance.

This island is home to the glass makers. They have been sequestered onto a single island for fear of fire, which wreaked havoc on Venice many a time. Be sure to consider Murano glass as a souvenir.